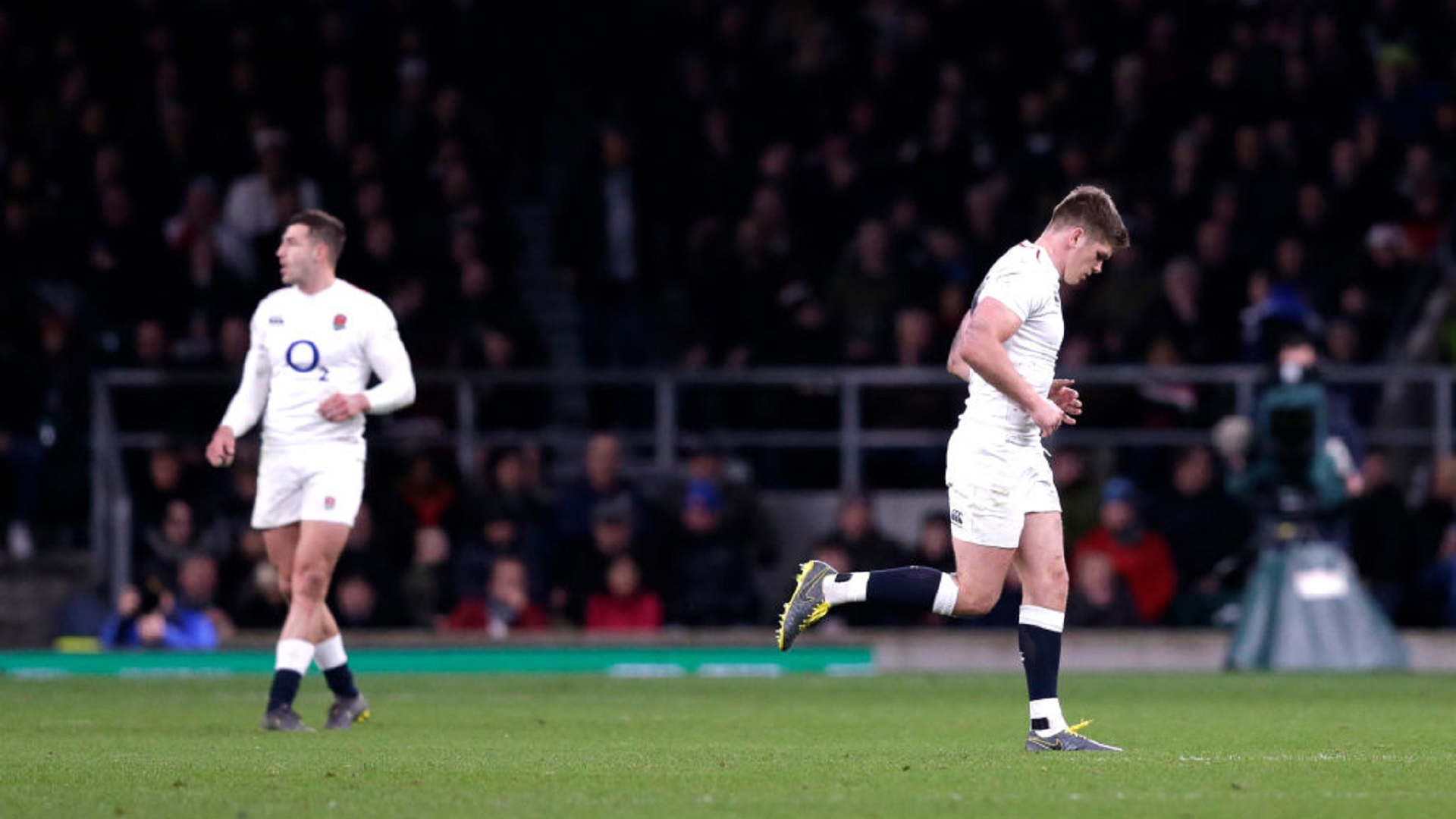 Their title hopes may have been derailed by Wales emphatically securing the Grand Slam earlier in the day, but that didn’t prevent England from turning in an impressive first half  at Twickenham, racing into a 31-7 lead at the interval.

England imploded in the second half, however, coughing up six unanswered tries and only just managing to salvage a 38-38 draw with a George Ford try right at the death.

We have rated all 23 of England’s players from a bonkers 80 minutes at Twickenham.

The full-back was in fine form, constantly influencing the game in attack. He came into the back line as a second receiver and always had his head up on the counter-attack, repeatedly finding space in the Scottish defence. His positioning and work under the high ball was very solid, too.

Nowell’s work rate reaffirmed Jones’ faith in him, as he not only managed to make ground on the wing, but also went looking for the ball in the midfield. He kept his depth well for his first half try, supported industriously and was reliable in defence, efficiently making low tackles on bigger carriers.

A creative masterclass early from the centre, who looked as if he was in a training game at times on Saturday evening. He drew men for Nowell’s early try and showed his comfort as a ball-handler with his back-of-the-hand offload for Jonny May’s try. He was effective early in defence, keeping his width and preventing Scotland from turning the corner, although it was notably exposed by Darcy Graham’s second score and big gaps began to form in England’s midfield.

Tuilagi’s out-to-in lines wrought havoc in the Scottish defence in the first half and repeatedly created space for his teammates further out. He operated a little wider in the second half and had more success as a carrier, but the momentum swing in Scotland’s favour meant that his solo tackles were the more influential part of his game after the interval.

A typically hard-working performance from May, who chased and competed in the air to good effect throughout the game. His support-running was rewarded with a first half try, although his missed tackle on Stuart McInally’s charge-down try will put a slight stain on an otherwise impressive showing.

It wasn’t the best performance from Farrell, who had his kick charged down for McInally’s try and his pass was intercepted for Finn Russell’s score. He had some nice handling moments in the first half and made all five of his kicks at goal, but it was not his usual confident and composed attacking display.

A couple of Youngs’ box-kicks had a little too much on them and gave his chasers an unenviable task, but it was not a game – until late – that was going to be decided in that facet. The tempo and accuracy of distribution that Youngs brought at the ruck was key to England getting their big carriers in the pack running onto the ball and breaking the Scottish defensive line in the first half.

The loosehead unfortunately had to leave the field after just four minutes with what appeared to be a rib injury.

George was one of the few England players to maintain his stellar first half form and carry it into the second. He was up quick in fringe defence, tackling low and efficiently, and carried as well as he has in this year’s tournament. His work at the lineout was also exemplary, with the hooker connecting on all 11 of his throws.

The interplay between Sinckler and his fellow forwards was impressive and it was his handling that helped set up Nowell’s early try. He chipped in with a solid platform at the scrum, multiple dominant tackles in the defensive line and even nabbed a lineout steal in a standard of performance that is becoming the new normal for the prop. He was missed badly after being replaced at 50 minutes.

Led the way at the lineout with six takes and managed to disrupt one of McInally’s throws. He put himself about in the defensive line in England’s second half stands, too, but struggled to positively impact the game beyond the set-piece.

Kruis put good pressure on the scrum-half around the fringes, carried well and showed impressive line-speed to hunt down the first receiver multiple times. He split the lineout targets with Launchbury and was a reliable option.

The flanker contributed to the swift ruck speed that England enjoyed and was efficient and powerful as a tackler. With England so rampant in the first half, however, it was a day for his more potent offensive teammates to shine at Twickenham, before being replaced by Brad Shields in his side’s second half meltdown.

Curry’s rise continued on Saturday as he tormented Scotland in attack and defence. He ran good lines and carried with incision, won turnovers and penalties at the contact area and topped up those two areas with offloads to keep phases alive and dominant tackles that dislodged Scottish possession. He faded out of the game in the second half, however.

The number stepped up once again as England’s primary carrier in the back row, both as a source of front-foot ball and as a passer in the back line. In his brother’s absence, he continued to pick up plenty of the slack on the gain-line in attack and defence. He also provided a fifth option to field kicks, alongside the back three and Farrell. A few spills in contact and taking passes blotted the copybook.

Cowan-Dickie connected with the pivotal lineout at the end of the game that allowed England to tie the game.

After an early introduction, Genge scrummaged well against the experienced WP Nel. He carried to good effect and linked up well with fellow front rower Sinckler. The Leicester man also chased and tackled well when England went to the boot. Lapses in ball-security blighted an otherwise encouraging performance.

Cole’s arrival coincided with England’s meltdown in the second half and the prop was more involved in damage limitation than proactively affecting the game. Scotland managed to get the nudge on in the scrum, too.

He came on for Wilson with time to influence the game but couldn’t offer anything extra, with momentum completely in Scotland’s favour.

Took a risk with a loopy offload after the clock had gone red, but it worked out well for England, who were able to cross the whitewash shortly after.

Good tempo and awareness of space after coming on late.

Ford scooted over for the try and made the conversion that tied the game for England, although his arrival was so late as to minimise the effect he could have had on the game.

A notable carry and pass that built towards Ford’s try and saved England’s blushes.

Sorry there has been an error