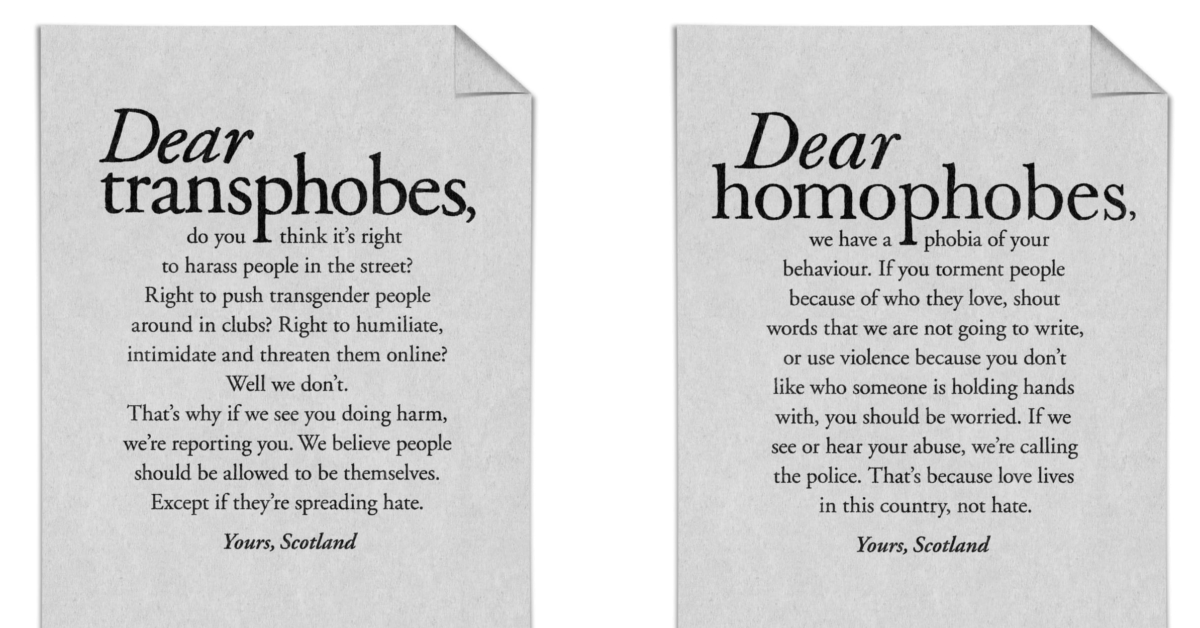 A new ad campaign is being rolled out in Scotland confronting homophobic and transphobic hate crime.

The provocative ads were produced by the Scottish Government and Police Scotland as part of the One Scotland campaign, a bold new project which seeks to reduce the risk of hate crime.

The ads, which have begun to appear across Scotland ahead of the campaign’s official launch on Wednesday, directly challenge people with hateful beliefs in the form of a letter, signed on behalf of Scotland.

One states: “Dear transphobes, do you think it’s right to harass people in the street? Right to push transgender people around in clubs? Right to humiliate, intimidate and threaten them online? Well we don’t.

“That’s why if we see you doing harm, we’re reporting you. We believe people should be allowed to be themselves. Except if they’re spreading hate.

Another says: “Dear homophobes, we have a phobia of your behaviour.

“If you torment people because of who they love, shout word that we are not going to write, or use violence because you don’t like who someone is holding hands with, you should be worried.

“If we see or hear your abuse, we’re calling the police. That’s because love lives in this country, not hate.

Further ads take aim at racists and people who discriminate against disabled people.

“In the last year there were over 5,300 charges of hate crime reported to the Procurator Fiscal in Scotland. However, there are many more incidents that go unreported.

“We all have a responsibility to report hate crime if we witness it – it’s the only way we can challenge it, and put an end to it for good.

“There’s no place for hate in Scotland. Report it to stop it.”

The ads earned praise from Stonewall Scotland, who hailed the “great leadership” of the Scottish government on the issue.

The Scottish National Party’s Angela Constance said previously: “We all need to play our part to eradicate hate crime, which has no place in Scotland.

“Ensuring we all take a stand and report hate crime is an important part of creating a fairer country for all. I look forward to seeing the country come together to support the campaign and take a stand against such hate.”

Chief Superintendent John McKenzie of Police Scotland said: “People of all races, religions, ethnicities, of any sexual orientation or with any disability should be able to live their lives free from hate or harassment. There is no place for hate in Scotland and it is our communities, who will lead the way in tackling hate crime with the support of police, the government and other partners.

“Hate crime is under reported, we want to change that and we are asking people not to be bystanders. Speak out, help us tackle hate crime. By working together we can drive prejudice out of our communities and out of Scotland.”

Read This: The Celebrities That You Didn’t Realise Are Gay