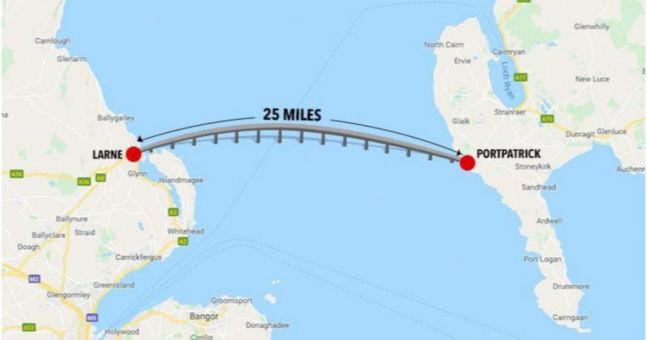 THE SCOTTISH GOVERNMENT has said that it is ready to begin talks with Belfast and Dublin about the feasibility of building a bridge between Scotland and Northern Ireland.

A spokesman for the Scottish Government told BBC Northern Ireland’s The View programme that it will “initiate discussions to explore improving connectivity between our two islands”.

The construction of a bridge or a tunnel has often been discussed and a proposal was also contained in the 2015 DUP manifesto.

East Antrim MP Sammy Wilson told the BBC: “We have got the most expensive stretch of water for ships and ferries to cross and sometimes it is disrupted by bad weather, etc.

“One of the suggestions we made was if you are going to go for blue sky thinking, huge infrastructure projects, why not look at the 22 miles between Northern Ireland and Scotland and build a bridge which would make travel less expensive and probably more certain.”

A bridge stretching from Larne in County Antrim to Portpatrick in Dumfries and Galloway has been suggested.

Scotland’s Brexit Minister Mike Russell has backed the idea of a bridge and said that a fixed link could only be a good thing.

The one major stumbling block in negotiations could be the large cost of such a project.

Many in the business community in Northern Ireland have serious reservations.

Seamus Leheny from the Northern Ireland Freight Transport Association believes road projects in the country should be prioritised over a bridge.

“We have flagship projects where we are struggling to get the capital money to build those and also our roads and maintenance budget.

“We simply don’t have the money to retain what we already have. So to build a bridge at this cost would be seen as a vanity project by some.”

The original idea of connecting Scotland and Ireland has been around for over a hundred and thirty years.

Plans from the 1890s show tunnels stretching from counties Down and Antrim to the west of Scotland to carry trains.

Ultimately, despite much consideration, the tunnels were never built.