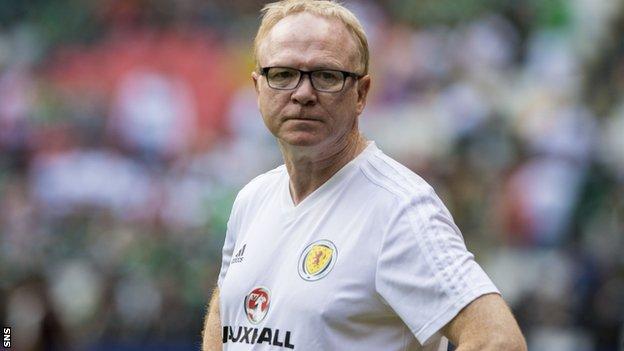 Alex McLeish says some players have given him “food for thought” for upcoming games following their displays in the summer tour.

With games against Belgium and Albania on the horizon, McLeish was upbeat despite defeats by Peru and Mexico.

“That was an amazing experience for these guys,” he told BBC Scotland.

“There’s a few who have given me food for thought in terms of the games coming up. I’m proud of every single one of the players.”

Following the 2-0 loss to Peru, Giovani dos Santos scored the only goal of the game as Mexico defeated the Scots at the Azteca Stadium.

McLeish said of the trip: “It was much maligned, but looking at the two games and the performances, we’ve got to encourage these guys to pass the ball, even in tight areas.

“We’ve been working on that and working on that mentality. But for the call-offs, some of them might have never experienced that. They’ve all enhanced their reputations with this trip.

“Yeah, we did give it away a few times, but there was a lot of good things.

“Oli McBurnie’s header against the post would’ve brought us back in it when the Mexicans started to get frustrated. Johnny Russell’s run in the box, when he fell, was a shame.”

‘I was kicking every ball’

With a lot of pre-match speculation regarding how the Scotland players would handle the high altitude in Mexico City, McLeish said: “I was shouting and kicking every ball; I was shouting at Scott McKenna at the end and I could see his face – he had nothing more to give.

“He was dreading someone else playing a one-two or running behind him, and that’s what happened in the dying minutes, but fortunately we had other legs there to cover.”

McLeish also felt that Scotland did well to deal with the threat posed by Mexico’s “exciting wingers”.

Regarding the issue of withdrawals from his squad, the Scotland manager said: “With the Fifa ruling, that the players don’t have to come, then clubs are entitled to protect their players. But if there was anybody faking it then that would be disappointing.

“But I’ve got to trust the clubs; I would be expecting payback from these guys.”

McLeish said he would consider a similar tour in future, should Scotland quality for a major finals.

“Well, I’d repeat it if we were going to a World Cup finals or a European Championships,” he added. “We may look for something more at home in terms of conditions-wise and maybe play Mexico and the USA, rather than coming here to Mexico City.

“But again, that should empower those players. They’ve got to go back to their clubs with their heads held high and take their own game to another level.

“The confidence should be there and the evidence is there. Obviously we don’t like to lose, but I think there has to be some sacrifices made in order for Scotland to go forward.”